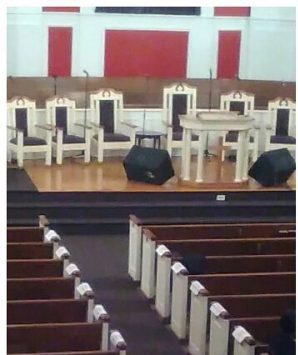 At a time when the world was in an uproar about the behavior of our youth, God called a dynamic young man, Dreyfus C. Smith, into the ministry in January of 1986, during this time God’s purpose was clear and His vision for the youth was revealed to this soldier of the cross.  At a time when the youth sat in the back of the church while the older generation ruled the scene, God saw fit to call a young man who was tough enough to make a difference and strong enough to take a stand on behalf of our youth and make His vision become a reality.  His mission was clear which was to take the youth from the hands of Satan and give them an opportunity to be a part of God’s army.  Rev. Smith informed a dying world that God’s house was for both the young and the old and in order to get the youth off the streets, we must allow them to use their God-given talents in the church.

As a result of adhering to the voice of God, Rev. Smith took the leap of faith and on July 2, 1989, Wings of Faith Baptist Church was formed.  After multiple meetings in his parent’s basement, and after being embraced by their love, empowered by their prayers, and strengthened by their wisdom, Wings of Faith Baptist Church was birthed.  The first worship service was held in the chapel of Thornton Mortuary with 75 members in attendance.  It was in this place our church was founded upon the scriptures taken from Isaiah 40:31, “But they that wait upon the Lord shall renew their strength; they shall mount up on WINGS as eagles”, and Hebrews 11:1, “Now faith is the substance of things hoped for, the evidence of things not seen”.  With Jesus as our guide, we witnessed the works of the Lord manifest miraculous changes and enhancements in our lives.

In October 1989, the Lord blessed us with our first church home located at 768 Martin Street in the Summerhill Community area.  As we continued to put our faith into action, we began to spread our Wings and the ministry increased in seven short months from a membership of 75 to well over 700 people.  Under the leadership of Bishop Smith, we have witnessed the awesome move of God who soared us from the Summerhill Community to the Mableton/Austell Community to the East Point Community to our current location in the Conley, Georgia.   While in the Mableton/Austell Community, we witnessed a charismatic shift in our worship from being traditional to non traditional and our ministry from Baptist to Non Denominational.  As a result of our phenomenal growth, we were led to restructure our ministry in 1996 and change the name to Wings of Faith Ministries & Family Life Center.  Over the past 27 years, we have witnessed the breath of God on this ministry and have led over 10,000 souls to Christ; and as of 2016 our current membership roll well over 5000.

It is a privilege to give back to God what He has so graciously given to us.

Click here to pay online via PayPal or Credit Card